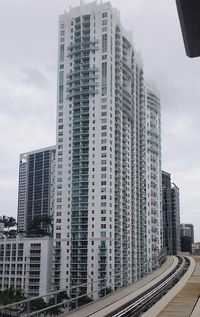 I’m down here in greater Miami this week, on a business trip (mostly, monkey business) with Vicki. This time we drove, so my expenses were even less. I mean, I chauffeured her rental car and piggy backed on the room. Only my lunches, while she’s working, were out of pocket. How can a fellow say no?

So we were in downtown Miami Saturday, enjoying lunch with her son, and she looked up at the overhead raised Metromover track. “I have always wanted to go up and just take a spin around on one of those. You know, Duncan, just ‘a ride to nowhere’, to see downtown Miami from the 3rd floor level”. Only later did I ponder the sheer absurdity of that suggestion, and the gift which I took in the moment prima facie to be true. *sigh* There, my friend, is a treasure; hang on to that one. 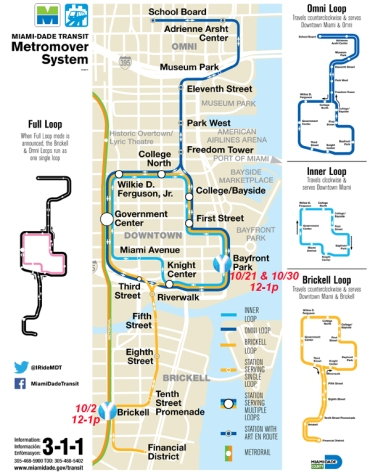 There is one track in Miami, with a circular path downtown. It has two spurs. To the south is Brickell, where we boarded. To the north is Omni, I think named after the basketball arena in Atlanta. These routes are lasso shaped where you ride from the spur into the center loop, once around, then back out; all free, perfect for a curious tourist. There is a third route that only runs in that center circle, not leaving on either spur. Then, during slow periods (I now presume before 6am after 10pm) trains default to “Full Loop” which mean it starts on one spur, circles half of downtown out the other spur, then back downtown half around and out the other spur. Why is this fact of note?

Well, we intended to go once around, but a one-in-a-million thing occurred. A busy mom, with a baby in a stroller, was juggling several bags from Publix as we jostled in the unsteady car. When the train moved forward, one bag slipped and a gallon of milk crashed to the floor, splitting open and spilling. It was first just a concern, but eventually we all just took it in stride. Nobody wanted to … cry over spilled milk. All the riders had rolled with it, as the car’s acceleration and turning slowly shifted the milky white puddle back and forward, then left to right. We played the kid’s game “the floor is lava” and tapped distracted fellow riders as the puddle approached them. Of course I was giving a non-stop lecture on rubber versus metal tires, pylon based routes and Vicki looked out the window humming and nodding. As the commotion grew, some started to enjoy the spill more than the view, so I said “let’s hop off and catch the next car”. Its about transit, not milk.

The three of us stepped off; me immediately studying the kiosk maps; Vee bemused at my ADHD behavior; and her son, earbuds firmly ensconced, eyes closed to slits, impersonating a bobble head doll. The next car was “financial” which was the inner local service only. We needed either “Brickell” or “Full Loop”. Since it was Saturday at 3pm I figured the off hour service may be running.

Now I know the latin root “Omni” roughy translates to “All” or “Every”. It gives us Omnivore, Omnipresent, Omniscient. I was looking for Brickell or the train that ran everywhere, and for a split second forgot its name, only to see “Omni” appear. Aha! I quickly pushed Vee aboard, and led the otherwise dreambound lad by the elbow. We laughed and took pictures and I continued my lecture series on the logistics of offering free versus ticketed short rides, taking pictures and enjoying the tour until the train took a wrong turn, looping back downtown. As the dreaded implication of “Omni” vs “Full” dawned on me, Vee reassured that we just “ride a couple more stops”, then step off and wait for a Brickell car surely following, then reboard. 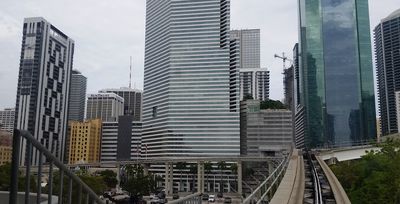 “Oh, no!”, I said, “Lets jump the reversed financial loop, go back two stops to ‘save time'” to catch a car. She muttered those famous words: “Sure, Duncan, you probably know better”. (After all, you’re a transit expert).

So we alit, and waited then entered the reversed direction car. It then had additional local only stops. When we finally arrived at the transfer station it had right side exits, not a shared straight across platform. We were required to walk out, down a flight of stairs, across a busy street, then up a flight of stairs. All to “save time”. Vee, bless her heart, smiled, twinkled, and enjoyed the voyage one step behind my fearless male leadership.

But mostly, she feasted on those three delicious words that everybody loves to hear. After another five minutes or so, when our fourth car of the afternoon veered off correctly to the south, heading us toward back toward the car park, I leaned over and whispered “You were right”.

And she said … “Oh Duncan, what do I know about transit systems?”